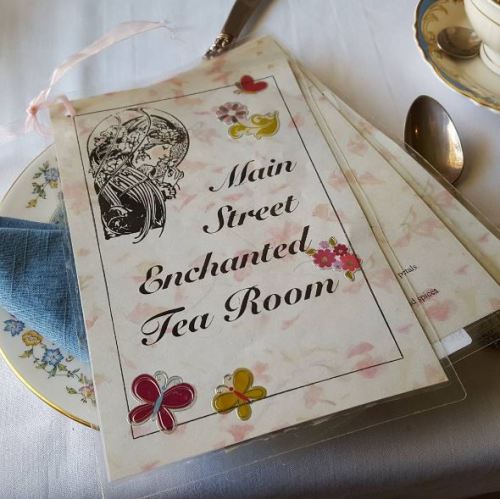 This was not so much a dining experience as it was a learning experience. Sometimes being in a restaurant on a slow day can be a good thing. It was a Friday afternoon and the town of Berlin was deserted. I had made a reservation for us at the Main Street Enchanted Tea Room anyway. When we walked in, we were the only ones there. It remained that way until right before we left when another table came in. But this was not a bad thing. We sat down to a menu of about 50 different kinds of tea from all over the world. The owner was our server, along with a gentleman who was in training. Both were exceptionally pleasant, but the owner was something else. She was a character. A performer in her own play. This was her business’s ninth year, she told us, before pulling up a chair and sitting with us for about 20 minutes.

“I’m old, so if you do not mind, I’ll take your order while sitting down,” she said with a laugh, before gesturing to her new employee, “He can stand. He’s a lot younger than me.” However, she did not just take our order. In fact, she wanted to know if we had ever done an afternoon tea before. She was prepared to explain all aspects of why things are done the way they are. While sitting with us, she not only went into detail about the items we would be getting on our three-tiered tray, but discussed how they were made. The minutiae of the recipes. How one kind of chocolate works better than another when baking. How when making one of the raspberry cakes, she replaced water with Mojito mix. Why the scone was precisely two inches high, and that the water for our tea was heated to 170 degrees. Little nuances like that.

Then came the tea. We each got our own pot with the tray, which was pre-fixe at $24 per person. Since it was St. Patrick’s day, I chose an Assam-Irish Breakfast blend, the Assam being from India. She asked if I had ever had such a tea, and when I said no, informed me that it comes on very strongly to the palate. She recommended that I let her add a third tea to the mix, from eastern Africa, which she said would, “temper the strength and make the flavor more delicate”. Who was I to disagree? I went with her suggestion, and it was the best cup of tea I’ve ever had. 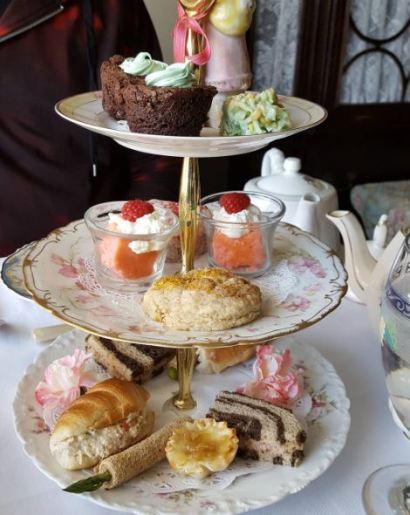 As for the food, it was all spectacular. Not just in taste, but in presentation and creativity. The desserts included a cube of the raspberry cake with a dollop of clotted cream and a fresh raspberry, a brownie-type baked good injected with mint cream, double the amount of chocolate chips, and the addition of mint extract to create the right burst of flavor. The scones, which are a staple to this service, were perfect. I had apple cinnamon maple while he had cranberry white chocolate. Some of the more lunch-like items included finger sandwiches of an asparagus spear wrapped in whole wheat bread with a hint of lemon curd (highly interesting, and intriguing to the palate—one of those things that should not taste good but does), marble bread with ham salad, a croissant with chicken salad, and the piece de resistance in my book, a pillow of phyllo stuffed with brie and caramelized onions. She explained the exact time and temperate this required to be perfect. And it was.

Between eating, sipping tea, relaxing, and chatting, I think we were there about two hours. I keep wanting to compare this to A Taste of Britain in Wayne, Pennsylvania (the first afternoon tea service we ever went to), but even with all of the obvious similarities, they are almost incomparable. Main Street Enchanted Tea had more of a homey feeling. Like visiting grandma’s parlor, not being in a restaurant. I suppose if it was filled up (like they get on weekends), it would not have felt this way as much. But the decor fits the mood. The owner loves to go to antique sales to pick up items. She even opened a cabinet to show us all of her glassware. You temporarily forget where you are. The entire time you’re in the moment. On the other hand, A Taste of Britain does have more of a restaurant/pub feel. They have a full menu aside from the tea service, while this one only has the afternoon tea, with a small selection of soups, salads, and sandwiches. I enjoyed both, almost equally, but some may find one better than the other depending on personal tastes.

My only complaint is not even really a complaint. More like a word of advice to diners. Your tiered tray will include many different finger foods. However, it is not a lot of food in itself. Remember, this is supposed to be a tea/snack/break, not a meal. As Americans, generally, we want to sit down hungry and leave full. This will not exactly happen here. This is supposed to be eaten between lunch and dinner. It is a way to relax or perhaps stimulate your palate, not stuff your face. We were starving when we arrived, and while it satisfied us, we did grab some food shortly after at a luncheonette down the street. But do not take this as a knock. 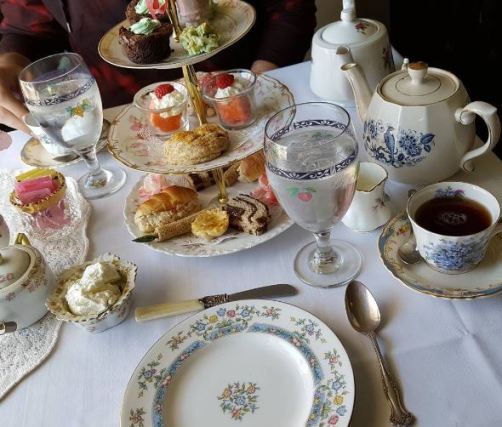 The vibe I get from Enchanted Tea is one of an owner with a passion. She speaks with an air of pride and wisdom, but also confidence in her cooking and presentation. The fact that she took so much time to speak to us says a lot. Even hearing her training the new server was a learning experience. The care and attention to detail was unmatched. As a food blogger, to hear her go on and on was a treasure trove of information. Things were more on the formal side, but not stuffy. In fact, the place has quite a sense of humor. A sign out front read, “No burgers, no hot dogs, no coffee”. And the menu and website notes that “for men dragged in kicking and screaming”, they can add bacon to whatever they are ordering as well as give you soda in a “manly mug”. BBQ sandwiches can also be made. In fact, they are more than accommodating with everyone. When you sit down, they ask if you have any allergies or are gluten-free or vegetarian. She specifically asked if we liked asparagus because she had back-up sandwiches just in case.

For the reasons stated in this review, I am giving Main Street Enchanted Tea Room 4.5 out of 5 stars. I would certainly go back the next time we are down in Maryland. “Call whenever you’re coming to the area”, she said. I plan on it. This is something everyone should try at least once. It was superb. It was enchanting.