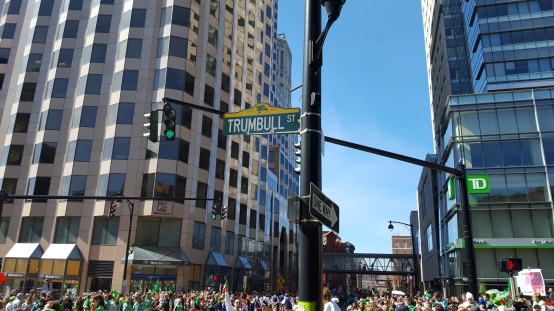 Hartford is a weird city because it can be so loud yet quiet at the same time. When visiting there last spring, I almost never knew there was a  St. Patrick’s Day parade happening in the first place. Would have missed it entirely if not for sheer coincidence. While eating breakfast at Sunberry Cafe and flying solo for the morning, I saw droves of people walking down the street holding cans of beer. How strange, I thought. Surely I must be mistaken. Minutes later, my friend called me to say there was a parade and the lady working behind the counter confirmed.

I stopped into the liquor store and asked what exactly was legal. As a New Jerseyan, I told them, where nothing is legal, I was fascinated by this. All the worker said was this was the one day out of the year when Hartford’s police department allow drinking in the streets. And drink they did. It is no exaggeration when I tell you that liquor quite literally flowed freely in the streets. Capital Liquors was practically giving away Irish booze: $3 Jameson shots and $2 jumbo cans of Guinness. The Thai restaurant next door, which has a bar, was also packed. People were grabbing cases of beer and dragging coolers to spots on the sidewalk where they could watch the parade.

Could I really get myself to drink at 10 a.m? No, of course not. I’m more civilized than that. So I waited until 11 and poured some Jameson into my coffee. I would have a clean conscience after all. The people next to me on the street, who were so friendly, drank more alcohol during this parade than I have ever seen in my life in such a short amount of time. They were from Manchester. We shot the breeze about hockey since I told them I was going to a Wolfpack game later that day. We managed to find the perfect spot on a street corner in front of a bank. Elevated on the front steps, we were out of the sun and high enough to see over the large crowd.

They offered me three different kinds of beer, Vodka, Straw-berritas, and even Hennessey. I said no to all, content with my makeshift Irish coffee. Yes, these four or five people had a mini liquor store in their cooler. I witnessed one guy alone down an entire six-pack of Miller Lite in about a half hour. The joke was on him though, as most businesses shut for the parade and there wasn’t exactly a bathroom close by. I heard later on that day how people would go into a bar, buy the cheapest shot they could, and knock it back just so they could use the bathroom.

So, why do I write this? I don’t really know. I just never figured Hartford for a party town. They started boozing it up around 9 a.m and were going straight through until nighttime when we walked back to the hotel from dinner at 9:30 p.m. Based on what I observed, people were loud and enjoying themselves, but never out of hand. More just wanted to have a good time and drink than actually watch the parade, as is usually the case (I mean, does anyone actually like parades?). They stayed with their group circles and pretty much kept to themselves. Make no mistake, I think I said to myself, “No way in Jersey” at least twenty times.

As a side note, for the hockey fans out there, you will be pleased to know that the largest cheer for any group to march was for the Hartford Whalers float. It was hard to see who exactly was there, but they had several alumni players, the mascot, and a loud goal horn blaring the goal song music and horn. That was really special to see. It was a fun afternoon and something I was glad to be a part of. Have a happy St. Patrick’s Day!