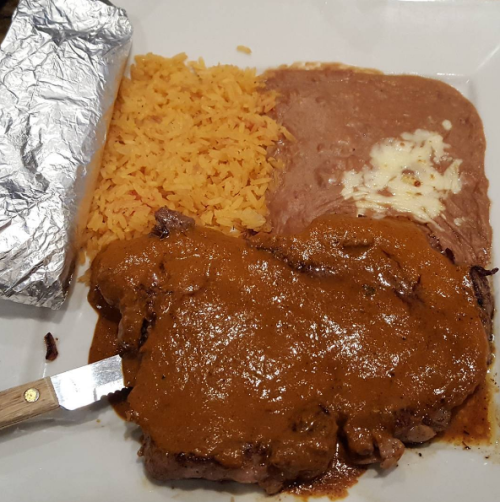 Plaza Azteca is a chain restaurant. Usually, I try to stay away from chains on vacation, but this was the last night of our trip and it was within walking distance from our hotel. There’s actually quite a few Mexican restaurants in town. We were told by a shopkeeper that the Mexican food in and around Kennett Square is top-notch. The quantity of mushroom farms in the area has welcomed in a small population of migrant workers over the years. They have brought their cuisine with them.

This place was good, chain or no chain. The guacamole was prepared table-side. The gentleman wheels a cart over to you and mashes up two and a half avocados with tomatoes, cilantro, and the amount of Jalapeno peppers to your liking. You can’t say it isn’t fresh (and only $8.99). My friend had some vegetarian burrito combo while I pressed my luck and ordered the steak ranchero. Normally, I would never get steak at a place like this, but something just told me to give it a try. For $16.99, it was a decent-sized NY strip covered in their ranchero sauce and served with warm tortillas and rice and beans. It was cooked right to my specification of rare. The meat was tender and juicy, and only had a little bit of fat on one of the edges. I just wish they gave more rice/beans.

Drinks were not bad either. $3.75 for a frozen mug of Dos Equis, while my friend’s frozen mango margarita was $8.99. They come in two sizes, regular and jumbo. There are no prices on the menu, though. After I finished my steak, I figured I would try a margarita too rather than get dessert. I ordered what I thought was the most basic one on the list, but was wrong. It was $13.99. But for jumbo sizes which pretty much were the size of two regular ones, it wasn’t too bad. Well-made, though not nearly as good as Tequila Mockingbird’s. This was a solid dinner with adequate food prices. I’m going to give Plaza Azteca a 4 out of 5 stars rating.

Plaza Azteca is located at Onix Drive in Kennett Square, Pennsylvania (behind the Hilton Garden Inn).