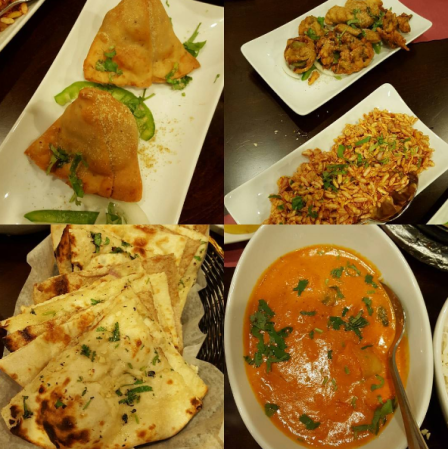 There are a few Indian restaurants I hold dear to my heart. In a way, I felt like I was cheating on them when I visited Haldi Chowk in Middletown last night. But it’s the new show in town, and given my affinity for this flavorful cuisine, I had to give it a try. I left there with mixed feelings. As always, let me begin with the positive. The service was very friendly and attentive, and helpful if you’ve never had Indian food before. That’s a big plus, because people find this type of fare intimidating for one reason or another.

However, there was a bit of a communication problem. I ordered the chicken tikka masala, what I usually get, so I could compare it. I said to leave out the bell peppers but that green chili was fine because I had asked for it to be extra spicy. Not only did they leave out the green chili entirely (rendering my dish even less than mild) but they also put in the bell peppers. I pushed them aside, not too big of a deal. The sauce was extremely flavorful. It was thick, rich, and creamy. You could taste the butter in every bite. But there was another problem, and that was the portion size. Only seven or eight tiny little cubes of chicken, probably half the size at what you would get at Neelam (right down the street) or Bollywood Tadka in East Brunswick. I think the pepper slices were bigger.

This was the same issue with another dish we had. I do not remember the name, but it was mixed vegetables rolled out into a patty, stuffed with cheese, and fried—a unique entrée, something I’d never seen at an Indian restaurant before. The dish contained four small logs. While they tasted great (and the sauce they were in was borderline amazing), there was hardly any food to speak of. It was like paying $12.95 for a bowl of sauce. On the other hand, the shrimp tikka included a dozen shrimp, which was adequate. We also tried the bread sampler which included naan, roti, onion kulcha, and garlic naan. All was good, and was great to drag through those creamy sauces. Make no mistake, the chef knows what he or she is doing. These are flavorful meals, but they need to up their portion size. Charge a little more money to accommodate the change. The prices aren’t bad, so there’s room.

As for appetizers, they were alright compared to similar I’ve had. The samosa pastry was thin and flaky, but not much flavor in the stuffing. The bhel (crispy rice with spices, served cold) had good flavor but was soggy. The vegetable pakora was serviceable, but not something I would recommend.

So what do we have here? A certainly not bad but not standout meal either. Average would be the word. Also, towards the end, the service became a bit erratic. Four separate times we were asked if we wanted to take anything home. The thing is, we had finished it all. There was no food left. Finally, the last time they asked, the waiter actually pointed at my plate asking if I wanted to have its contents wrapped. I wanted to say, “What would you like me to take home, the bell peppers that shouldn’t have been there in the first place?” One more time would have been annoying, instead it’s just a little bizarre.

Haldi Chowk is a new business. I wish them the best of luck, but I’ll stick to Neelam right down the street. I’d also rather drive 40 minutes away to Bollywood Tadka. I want to say the pieces of the puzzle are there, they just need to put it together. That would be putting it kindly. I’ll give them 3.5 out of 5 stars. I wanted so badly to like this place, but they’ve given me no reason to return.